An Assessment of Abenomics and Challenges for the Suga Administration

Abenomics, the economic policy of the Abe administration, aimed to realize sustainable growth in Japan by pulling the economy out of prolonged deflation. Abenomics improved various economic indicators through the "three arrows" of unconventional monetary easing, flexible fiscal spending, and a growth strategy to stimulate private investment. The second arrow, flexible fiscal spending, had limited impacts because of accumulated fiscal deficits. By contrast, the first arrow, aggressive monetary policy by the Bank of Japan (BOJ), was successful in lifting the economy out of deflation. After the start of Abenomics, employment improved remarkably. The corporate sector showed a significant increase in profits, and stock prices rose significantly. The GDP gap (demand-supply gap) turned positive, indicating that the long-standing shortage in demand in the Japanese economy had almost been resolved.

However, under Abenomics, there were a number of weak indicators in the economy. In the labor market, despite a serious labor shortage, nominal wage growth was modest and real wages declined. Consumption was sluggish, particularly after the consumption tax rate increase in April 2014. Increases in consumer prices were far below the BOJ's 2% target. In the corporate sector, productivity only showed slow recovery and cash/deposit holdings accumulated substantially.

A more critical issue was that various structural problems remained unresolved. The birthrate continued to decline and the population to age at a pace unparalleled in other countries. Despite increased tax revenues, the accumulation of government debt reached unprecedented levels because of dramatic increases in social security expenditures. Until such structural problems are resolved, it will be difficult to enhance private consumption and capital investment. To revitalize the Japanese economy, the implementation of effective growth strategies has been indispensable.

Under Abenomics, a variety of structural reforms were proposed to increase productivity and to create new frontiers backed by human resources and technology. The Abe administration aimed to end Japan's declining birthrate and slow the aging of the population. It also aimed to realize a drastic reduction in social security expenses (medical care, nursing care, and pensions). However, most of the reforms were insufficient. Structural reforms would have been useful not only to enhance growth potential from the supply side but also to push up the economy from the demand side. In Japan, there has been strong pessimism about future growth prospects in both the household and corporate sectors. If effective structural reforms can eliminate the pessimism, domestic consumption and capital investment will increase and the prolonged stagnation will be resolved. To stop the prolonged stagnation, we need to impose rapid and sometimes painful structural reforms.

On 16th September 2020, the new prime minister Yoshihide Suga took office in the midst of economic turmoil brought about by the COVID-19 pandemic. He indicated that he would continue many elements of Abenomics. The initial economic policies, however, needed to diverge from those of Abenomics in a few key areas, owing to the influence of the pandemic. A fragile economy faced a sensitive tradeoff between economic activity and the spread of the coronavirus. Until things return to normal, face-to-face service industries such as restaurants, tourism, and entertainment will be in serious trouble. Redistribution policies will remain important to support the troubled industries. However, we need to pursue wise fiscal spending to ensure that the money will be distributed to those who really need it. The key is how to distribute limited financial resources efficiently.

The most important policy agenda item for the Suga administration is the implementation of effective structural reforms for the post-COVID-19 world. Most economists predict that the world economy, which experienced unprecedented output decline in 2020, will show substantial recovery in 2021. However, the economic recovery in 2021 is expected to be slower in Japan than in the USA and Germany. Most of the structural problems that had plagued the Japanese economy before the pandemic are still unresolved. Abenomics did not devote enough political capital to effective reforms. The Suga administration needs to accomplish these reforms. Many of the industries hit hard by the pandemic are those with low profitability. It is necessary to restructure these industries and to promote new industries that will contribute to sustainable growth of the Japanese economy. 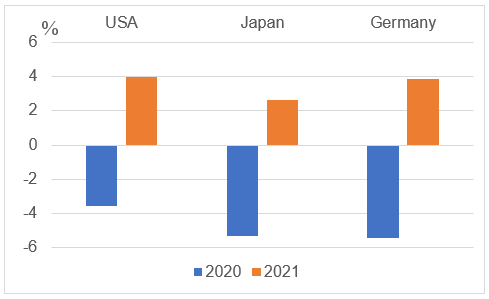 Local revitalization is another promising reform to revitalize the economy. Economic concentration in the Tokyo metropolitan region has progressed ever since World War II, but the negative effects of such concentration have become apparent in recent years. With the spread of telecommuting and teleworking, there is growing momentum to rectify the unipolar concentration in central Tokyo in the post-COVID-19 world. If an environment is created in which people can work and live in rural areas, the Japanese economy will have more room to achieve a balanced growth path.

There is no doubt that structural reforms are desirable. However, those who generally support structural reforms have sometimes voiced opposition when it came to specifics. It has thus been difficult to put such reforms into practice. Policies that significantly change the current economic structure are subject to strong opposition from people who depend on it. On the other hand, their immediate benefits are so small that those who support specific reforms are limited. Firm political leadership in the face of vested interests is needed to advance effective reforms. The true value of the Suga administration will depend on how successful its growth strategy is.

Shin-ichi Fukuda is Professor at The University of Tokyo.


The views expressed in this piece are the author's own and should not be attributed to The Association of Japanese Institutes of Strategic Studies.

PDF
Back To Archive