In this paper, the weighted average of official aid, which is calculated by weighing the degree of democracy of the donor country, is taken as the democracy score of ODA received by the recipient country in a given year. The data used to calculate ODA amounts is the total official flows by country and region (ODA + official development flows [ODF]), which is one of the statistics compiled by the Organization for Economic Co-operation and Development (OECD). This data summarizes the flows between donor and recipient countries for the years 1960 - 2019 (as of the time of writing this article), including ODA and other official assistance (ODF) (hereinafter, these are collectively referred to as "assistance"). From this data, 20 countries (Algeria, Bahrain, Egypt, Iran, Iraq, Jordan, Kuwait, Lebanon, Libya, Morocco, Oman, Qatar, Saudi Arabia, Sudan, Syria, Tunisia, Turkey, United Arab Emirates, Palestine and Yemen) in MENA are extracted as the focus of this article. The total amount of aid received by these 20 countries each year since 1960 is calculated based on this data. The democracy score is based on the Polity2 score included in the Polity5: Authority Characteristics and Transitions Datasets created by the Center for Systematic Peace. This is an indicator of the level of democracy in each country from 1800 to 2018 on a 21-point scale of -10 to 10. This paper examines the period from 1960 to 2018, the period for which data on aid amounts is available.

Based on these two types of data, the degree of democracy in aid received by countries in MENA in a year is estimated by the following equation:

Here, valuen is the amount of aid provided by each donor to MENA countries in a given year. Polity2n is the Polity2 score of the donor for that year.

is the sum of assistance paid by all donors in that year. As this formula shows, if a country with a high Polity2 score (i.e., a higher level of democracy) provides more aid than a country with a low Polity2 score (i.e., a higher level of authoritarian tendencies), the democratic trend in aid received by countries in MENA increases. The opposite scenario can also be assumed.

The analysis results are as follows. Figure 1 shows the total amount of grant aid provided to MENA by the Gulf Arab countries. What the figure shows is, first, its relationship with oil prices. A sharp increase in the early 1970s, a sharp decline in the 1980s, and a sharp increase again in the early 2010s indicate that this aid is largely linked to oil prices. In 1990, when oil prices were low, the main reason for the surge in aid is thought to be the Gulf War. Second is the magnitude of the fluctuation range. In the first half of the 1970s when the aid amount was largest, it exceeded $40 billion. But from the 1990s to the first half of the 2010s, it remained around $4 billion, indicating a fluctuation range of about 10 times. How has this influx of aid from the Gulf Arab countries affected the overall aid received by MENA?

Figure 2 shows the changes over time in the degree of democracy in the ODA grants received by MENA countries. As this figure shows, there are three major "valleys of authoritarianism" of aid received by MENA countries. Steep troughs appeared in the early 1970s, in 1990, and after 2010. This contrasts with the aid provided by the Gulf Arab countries shown in Figure 1. From this, we can understand the following points. 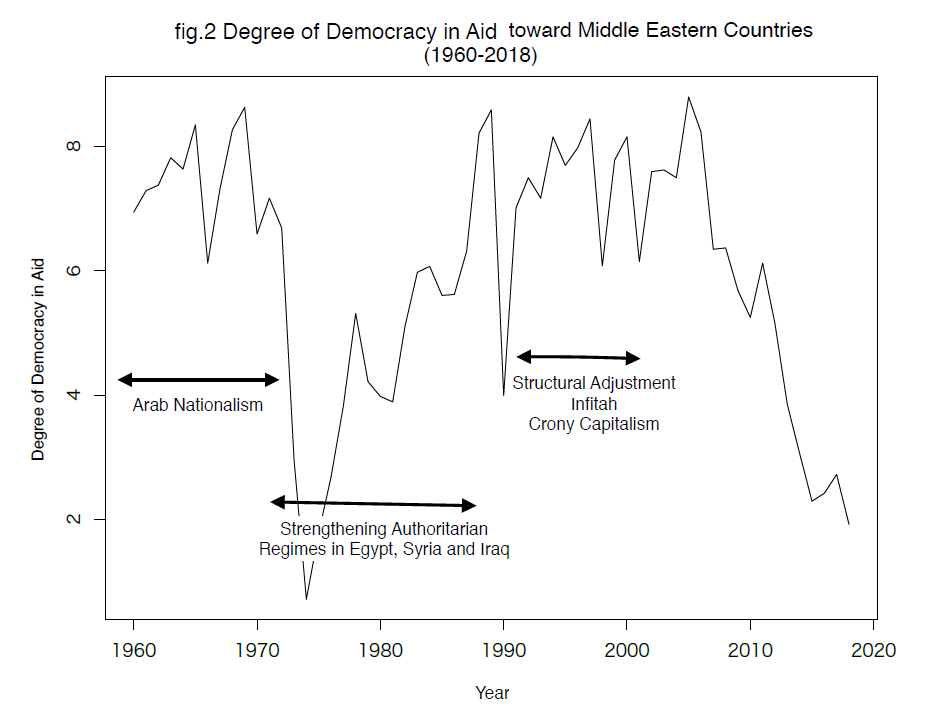 First, aid from Saudi Arabia, Kuwait and the United Arab Emirates significantly reduces the degree of democracy in aid provided by all other countries. There are many authoritarian countries in the world, but the change in the degree of democracy in aid flowing into MENA can be explained by the increase or decrease in aid provided by the three Gulf Arab countries.

Second, the stability of the governance systems of MENA is likely to be influenced by aid from the Gulf Arab states. For example, Egypt's signing of an isolated peace agreement with Israel (1979) could be interpreted as the result of rapidly increasing financial assistance in the 1970s which made it possible for Egypt to maintain a stable government and to remove the shackles of "the Arab Cause". Furthermore, the structural adjustment programs in Egypt and Syria that began in the 1990s and the partial democratization that began in the 2000s (a reform of the presidential electoral system in Egypt, and the "Damascus Spring" in Syria) can be understood to reflect a greater degree of democracy in aid received by MENA countries resulting from a decrease in aid from the Gulf Arab countries. Moreover, the sharp increase in aid from the Gulf Arab countries since the early 2010s, that is, the rapid decline in the level of democracy in aid that MENA countries have received, may explain why the "Arab Spring" has not led to the establishment of a democratic system of government.

These prospects can be made clear by examining the relationship between governance and aid in MENA in greater detail.

(This original Japanese version of this paper is dated January 27, 2021.)