Disasters are increasing all over the world due to factors such as urbanization and population growth. According to the recent IPCC Sixth Assessment Report, climate change is expected to increase the frequency and intensity of heavy rains and droughts and, if sufficient measures are not taken, disaster damage will increase further. In preparation for such disasters, countries have strengthened their efforts to manage disasters. Investment in flood protection infrastructure has increased and, in addition to structural measures, steps such as relocation are being taken from the perspective of disaster risk reduction (DRR) through urban development in harmony with nature. Sustainable and green measures are also being taken in the process of recovering from the novel coronavirus pandemic.

This paper reviews the approaches taken by a representative sample of countries to adapt to climate change and discuss the challenges. In particular, it focuses on green infrastructure and nature-based solutions (NbS), both of which have been attracting increasing attention in recent years as ways of utilizing the functions of the natural environment to address various social issues, as well as projects for relocation from at-risk areas.

Europe, Japan, and the United States are increasing their investment in DRR and promoting flood protection infrastructure in order to respond to disasters with increasing severities (Table 1). In addition to the construction of conventional levees and other structures, their plans call for multilayered measures such as relocation from risk areas and urban planning.

The European Union issued flood directives in 2007, requiring countries to assess risk, develop hazard risk maps, and formulate flood risk management plans. The member states have aldready formulated flood risk management plans and started implementing them. It was proposed that flood countermeasures that also address climate and socioeconomic changes, urban sprawl and soil management be promoted as future measures. The European Union adopted the Climate Change Adaptation Strategy in February 2021. The strategy calls for strengthening cooperation in DRR to reduce climate-related risks such as floods. At present, European countries invest an average of €3 billion (\390 billion) annually in flood protection. Some estimate that more than €10 billion (\1.3 trillion) will be needed in future.

The Netherlands has formed much of its land by reclamation and is protected by flood protection facilities; 70% of its population lives in areas below sea level. The Delta Act for flood protection, water supply and climate change adaptation was enacted in 2012 to promote the Delta Program for investing €1.25 billion (\160 billion) annually until 2032. Flood countermeasures include three layers beyond the building of structures: (1) reinforcement of levees, (2) urban planning, and (3) crisis response.

The United Kingdom announced a flood countermeasure policy (Policy Statement) in 2020. In addition to infrastructure development, it will promote integrated water management addressing droughts and floods, nature-based solutions (NbS), support for local communities, and watershed approaches. Between 2021 and 2027, the UK will double its investment in flood protection to £5.2 billion (¥780 billion). This will protect 336,000 households and reduce damage by 11%.

In the United States, the Biden administration is working on a bill to invest in infrastructure, including a $50 billion (¥5.5 trillion) fund for DRR.[*]1 In addition to building levees and other facilities, advanced measures have already been taken to reduce flood risks, such as providing flood insurance, buy-out of houses in flood hazard areas (Figure 1), and conducting managed retreats. 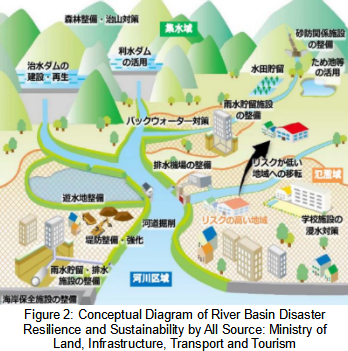 As for Japan, the "Five-Year Acceleration Plan for Disaster Prevention, Mitigation, and National Resilience" was formulated in 2020. The government plans to invest approximately \15 trillion between 2021 and 2025 in a system designed to prepare for increasingly severe and frequent meteorological disasters due to the effects of climate change and large-scale earthquakes such as the imminent Nankai Trough earthquake. "River Basin Disaster Resilience and Sustainability by All" has been proposed as a flood countermeasure for adapting to a changing climate (Figure 2). Intensive investment in flood countermeasures has successfully reduced flood damage. In the future, not only mainstay measures such as levees and dams but also flood countermeasures along the entire river basin, such as the relocation of towns from at-risk areas and the storage of floodwater in paddy fields, will be tackled.

Among the adaptation measures announced by individual countries, green infrastructure (GI) and managed retreats, which have garnered significant interest in recent years, are examined and issues to be addressed are considered in this section.

The objectives and targets of GI are not uniform, and each country and organization has its own definitions and approaches. The European Union defines GI as a network of natural and near-natural environmental measures to provide ecosystem services and protect diversity in urban and rural areas. In the United States, rainwater drainage measures fall into this category. This section collectively calls GI the measures under GI as defined by the EU and the United States as well as nature-based countermeasures (NbS), and examines flood protection measures. 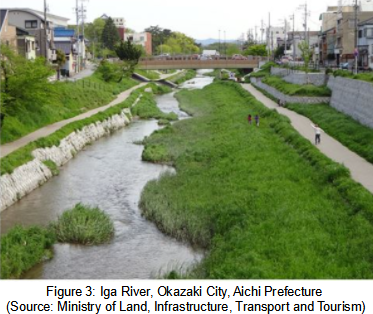 Some say GI is more economical than gray infrastructure made from concrete.In the United States, asssessments are made of the economic benefits of coral reefs and wetlands in mitigating coastal disasters. It was reported that wetlands reduced the damage from Hurricane Sandy in 2012 by about \69 billion, or 1%.[*]2 Coral reefs have reduced inundation damage by an estimated one-tenth to one-fifth in wealthy coastal areas such as Hawaii, Florida, and Puerto Rico.[*]3 In addition, it has been pointed out that greater biodiversity, better water quality and recreational use are among the various benefits that can be created.

In Japan, nature-rich river works that have been implemented in river projects since the 1990s rests on a concept similar to GI. These river projects aim to preserve and create ecosystems and landscapes by utilizing the functions of nature (Figure 3). This method stems from the reflection that river improvements made with three-sided concrete walls, frequently used in the interest of efficiency during the period of high economic growth, have deteriorated landscapes and ecosystems. About two-thirds of public works classified as GI in Japan are reportedly river works.[*]4

Issues have also been pointed out. The limits of the effectiveness of coastal disaster-prevention forests became clear with the Great East Japan Earthquake in 2011. Although they reduced the energy of the tsunami and trapped floating debris to help diminish the destruction, the disaster-prevention forests themselves were severely ravaged and thus could not completely prevent damage from the tsunami.

There are no plans or construction methods in place. More extensive technical literature will be needed to widely disseminate the GI measures. Technical standards, guidelines and manuals have been available to implement conventional structures.,

For this reason, no method of economic analysis has yet been established. Methods for calculating the construction costs, maintenance costs, and benefits required for economic analysis are still under development. 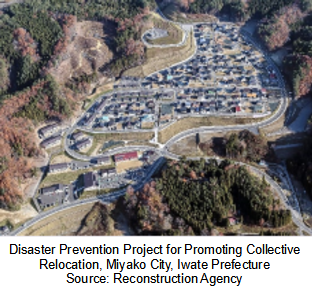 Moving houses from at-risk areas can reduce the risk of disasters. In Japan, a project to promote collective relocation for disaster prevention was carried out as a major reconstruction project following the Great East Japan Earthquake. Local governments banned the construction of new houses in tsunami-risk areas and purchased land to rebuild houses in safer areas such as high ground. 393 relocation sites were developed as well as about 48,000 houses: 18,000 as regular homes and 30,000 as public housing for disaster victims.

In the United States, more than 40,000 homes in flood-prone areas have been purchased and relocated since the 1990s,. The land that was purchased was not allowed to be developed as housing, and was instead used for parks, farmland, sports facilities and other purposes that presented no flood concerns. The buyouts are voluntary, not compulsory. Residents may continue living in these areas if they renovate their homes by, for example, raising their floors. Relocation programs were implemented in Indonesia, Sri Lanka, and other countries as part of reconstruction projects following the 2004 Indian Ocean tsunami.

However, some problems have been pointed out. Communities may collapse and disappear. It is not easy to reach agreement on relocations, and it takes several years to develop new sites and infrastructure. If residents do not agree on relocation sites or cannot wait for projects to be completed, they may move to other areas such as major cities , leading to the decline of local communities and industries. In many areas affected by the Great East Japan Earthquake, the population decreased. This concern is even greater in the United States. Although there are buyout programs for disasater areas, there is no system like that in Japan for developing relocation sites, and individuals rather than groups are required to find new locations on their own. Relocation sites have been exceptionally established to maintain communities in 20-30 municipalities, with collective relocation being carried out using separate project systems.

Social disparity and inequality may increase. If low-income earners and the socially disadvantaged are forced out by buyouts and relocations without consideration to rebuilding their livelihoods, vulnerable persons may not benefit from the project. This phenomenon is called "gentrification" in the United States. In Japan, public housing for disaster victims has been developed and support such as rent subsidies has been provided for the elderly and low-income earners who face difficulties rebuilding their houses on their own; wellness checks on the elderly have even been conducted. Nevertheless, problems such as solitary deaths have not been solved.

Local governments need to have the capacity to perform complex tasks, among these being first-time tasks such as building consensus among disaster victims and setting up relocation sites. In both Japan and the United States, there are examples of project processes being undertaken with the support of outside experts.

3.3 Governance as a common challenge

Both GI and relocation projects require the cooperation of a diverse range of stakeholders, including multiple organizations, local communities and experts, and they call for governance that differs from conventional DRR measures. It might have been possible for technical government offices to move forward with top-down measures if only structures were involved. However, consensus building among residents is indispensable for relocation projects. If residents disagree over whether to rebuild their homes on their original sites or relocate to higher ground, the project will not make any progress. The participation of residents in decision-making and planning became an important factor for the smooth implementation of projects in the United States and Tohoku region.

GI requires knowledge and skills not only in engineering but also in enviromental issues, ecosystems and community planning. Multidisciplinary cooperation is needed. In addition, waterfronts are used by local communities for environmental learning, recreation and relaxation, so the participation of residents is essential to ensure their diverse needs are met. It is also expected that residents will clean, maintain and otherwise manage the facilities.

Even if traditional structural measures continue to play an important role in adapting to disasters exacerbated by climate change, they will not be enough. Countries are thus coming up with multilayered measures that include not only structural measures but also urban and community development. In particular, green infrastructure and relocation projects can effectively mitigate disaster damage. However, there are challenges in implementation pertaining to policies, technologies, and governance.

It is necessary to strengthen the efforts of individual countries by promoting the exchange of knowledge and conducting policy research. In the case of GI, there are issues pertaining to definitions, best practices, project targets, damage mitigation effects, technical standards, economic analysis, etc. For relocation projects, it is necessary to consider project composition, cost-sharing and consensus building. Knowledge in these areas can also be applied to sustainable efforts in developing countries enjoying rapid economic development.

Japan carried out large-scale projects to promote collective relocation of disaster-affected communities during the reconstruction process following the Great East Japan Earthquake, and has several decades of experience in nature-rich river development. It has accumulated a significant body of knowledge, and it is therefore expected to make active contributions.

This is English translation of Japanese paper originally published on 11 October 2021.

PDF
Back To Archive