JIIA Strategic Comments (2020-1):
The Demise of the Two-State Solution: The Realities Trump's Peace Plan Will Create

At the end of January, US President Trump announced a Middle East peace proposal that he himself lauded as "the deal of the century". The introduction to this peace proposal called "A Vision for Peace" stresses that it would "create a realistic two-state solution" because it addresses "today's realities" surrounding the Palestinian issue. However, the nature of this proposal differs greatly from two-state solutions previously pursued by the US and the international community as a whole.

Israel and the Palestine Liberation Organization (PLO) signed the Oslo Accord in September 1993. The concept underlying that accord was a two-state solution in which an independent Palestinian state with its capital in East Jerusalem would be established in the West Bank of the Jordan River (hereinafter, "the West Bank") and the Gaza Stripboth of which have been occupied by Israel since the 1967 Arab-Israeli War and would co-exist with Israel. Circumstances in the West Bank and Gaza have changed greatly over the past 27 years, however, and the prospects for a two-state solution have mostly perished. In that sense, the Trump peace plan can be said to have struck the final fatal blow that killed the two-state solution.

The most prominent features of the Trump peace proposal are that it gives utmost priority to Israeli security and that it accepts the status quo, includingexpanded settlements. As a result, the "State of Palestine" depicted in the peace plan diverges greatly from the state envisioned by the Palestinians and indeed from the ordinary image of a sovereign state, as seen in the following examples:

The Trump peace plan thus seeks to cram the Palestinians into a territory divided into segments so small they cannot be said to constitute an independent country, and to limit Palestinian sovereignty. In a public opinion poll of Palestinians conducted in the West Bank and Gaza shortly after the plan was announced, nearly all (94%) of the respondents opposed acceptance of this peace proposal (https://www.pcpsr.org/en/node/797), a very natural reaction. There is no possibility whatsoever that the Palestinians will agree to peace talks based on the Trump proposal.

US and Israel to carry out annexation jointly

Independently of the resumption of peace talks, the Trump proposal gave a green light to Israel's unilateral annexation of occupiedterritories. In fact, shortly after the peace plan was announced, Prime Minister Benjamin Netanyahu indicated that procedures to annex the Jordan Valley and other territory would begin immediately. Although the start of annexation procedures was subsequently postponed, even Netanyahu's political rival Benny Gantz, leader of the centrist political alliance Blue and White, has stated that any new post-election government would begin the annexation process. Annexation by Israel is therefore likely to become a fait accompli soon.

Surprisingly, the details of Israeli annexation are to be determined by a joint US-Israel committee to be headed by US ambassador to Israel David Friedman (https://www.haaretz.com/israel-news/.premium-u-s-ambassador-to-israel-friedman-to-lead-joint-committee-on-settlement-annexation-1.8535064). Ambassador Friedman is a well-known advocate of settlement activities. This annexation of occupied territory is thus to be brazenly carried out through coordinated US-Israel efforts in violation of international law.

Israeli annexation is closely tied to the issue of water resources. The rain that falls in the mountains of the central West Bank accumulates in underground aquifers and then flows as groundwater down to lower altitudes, reaching Tel Aviv and other population centers along Israel's Mediterranean coast. Accordingly, the West Bank holds great significance in terms of securing water, a scarce resource in the Middle East, and Israel has controlled all usage of water resources in the West Bank since the Oslo accords, taking more than 80% of the water from aquifers for its own use and requiring the Palestinians to purchase water from Israel (http://documents.worldbank.org/curated/en/736571530044615402/pdf/WP-P157979-Securing-Water-for-Development-in-West-Bank-and-Gaza-PUBLIC.pdf ).

Oddly enough, the Trump proposal barely touches on these valuable water resources. Nevertheless, the maps appended to the proposal show that Israel would annex the Jordan Valley as well as those parts of the northern West Bank possessing key aquifers. Even widespread use of reprocessing and other new technologies would not diminish the decisive importance of natural water resources for social and economic development and, in view of a growing Palestinian population, there is little doubt that water issues will spark serious conflict in the near future (https://foreignpolicy.com/2020/02/04/trump-kushner-peace-plan-israelis-palestinians-water/).

Jordan caught in the middle

Representatives from the United Arab Emirates (UAE), Oman, and Bahrain took part in the White House ceremony held to announce the peace proposal, thereby expressing their de facto support. Egypt and Saudi Arabia also released statements "praising" the Trump administration's efforts to bring about peace. On the other hand, an emergency meeting of Arab League foreign ministers released a statement opposing the peace proposal. Given that individual League members attach great importance to their bilateral relations with the US and would not dare openly oppose it alone, it is likely this statement of protest was released collectively in a bid to appease deeply-rooted anti-Israel sentiment within their own countries. In any case, the Palestinian issue seems to be diminishing in significance for the Arab world.

Meanwhile, Jordan issued a statement critical of the plan. Jordan has resolutely maintained its traditional status as guardian of the Muslim holy sites in Jerusalem, which has accorded a certain degree of legitimacy to the Hashemite family's rule. Should the peace plan become a fait accompli, however, Jordan's traditional position will be greatly undermined. In addition, a significant number of Palestinian refugees reside within Jordan, which is also home to such organizations as the Muslim Brotherhood who oppose improving ties with Israel. The Hashemite family could face both strong opposition within their own borders and strong pressure from the Trump administration to accept the peace proposal, placing the country in a very precarious position.

The Palestinian issue has fallen in priority outside the Arab world as well. The UN Security Council took up this issue in February, but a resolution criticizing the Trump peace proposal was withdrawn without being adopted and the issue ultimately dodged with a statement released by the council president calling for support of a two-state solution. Similar moves were made within the EU to pass a resolution critical of the Trump proposal, but no consensus could be reached among the 27 countries in the face of disagreement from Italy, Hungary, the Czech Republic and other countries who emphasize relations with Israel.

Is Iran a "common threat"?

The threat of Iran is stressed throughout the Trump proposal, which calls for expanding security cooperation between Israel and Arab countries. For example, it advocates the creation of an Organization for Security and Co-operation in the Middle East (OSCME) modeled after the Organization for Security and Co-operation in Europe (OSCE), but there clearly seems to be a conceptual misunderstanding here. The OSCE was created during the Cold War as an East-West forum for a divided Europe, and it represented an inclusive effort to ensure security cooperation among all member parties that would transcend this divide. It therefore differs in principle from an exclusive alliance aimed at standing up against a "common enemy". The OSCME is envisioned as an exclusive regional organization premised on combatting the "common threat" of Iran, though, and is thus clearly based on the idea of an alliance.

In that regard, the Middle East Strategic Alliance (MESA) for which the Trump administration pushed in 2017 is closer in nature to an anti-Iran alliance, as indicated by its description as an "Arab NATO (North Atlantic Treaty Organization)". Nearly three years have passed since this project was suggested, however, and no concrete steps have been taken yet to form such a strategic alliance. The most likely reason is that the Arab countries are not as intent as the Trump administration on excluding Iran as a "common threat". Qatar, Oman and Kuwait - all members of the Gulf Cooperation Council (GCC) - have long maintained relations with Iran, and the UAE, too, resumed maritime security dialogue with Iran last summer for the first time in six years. Even Saudi Arabia has reportedly been seeking out opportunities for dialogue with Iran. Indeed, many Middle Eastern countries, including Israel, are uneasy about the hollowing-out of the US' commitment to the Middle East.

The failure to follow through with the peace process after the Oslo accords and achieve a two-state solution can be attributed to a number of factors, including back-and-forth violence, mutual distrust and internal divisions among Palestinians. A more fundamental reason for this failure, however, is the structural asymmetry between the parties involved that has been inherent in the Oslo peace process from the outset. Israel is a sovereign state and an occupying power, while the Palestinians live under occupation and enjoy no sovereignty. This is why Israel has brought overwhelming force to bear on every front over the past 27 years, while the Palestinians have had no effective means of countering this.

This structural asymmetry takes on its most extreme form in Israel's settlement activities. The number of Jewish settlers in the West Bank nearly quadrupled from 110,000 in 1993 to 420,000 in 2018, and the Trump proposal merely confirms this fait accompli established by structural asymmetry as part of "today's realities".

Nevertheless, the "death" of the two-state solution does not mean an end to the Palestinian issue. The Palestinian population will continue to increase, with Gaza, already home to one of the world's highest population densities, forecast to see its population more than double to nearly five million by 2050. Furthermore, Gaza's unemployment rate exceeds 60% as a consequence of Israel's 13-year blockade. Both the West Bank and East Jerusalem can expect to see repeated violent clashes among the Palestinian residents, the Israeli military and Jewish settlers. The Palestinian residents do not trust the flagrantly corrupt Palestinian Authority (PA) led by President Mahmoud Abbas. The Trump administration has almost entirely suspended aid to Palestine as "punishment" for the PA having rejected its peace proposal, raising the distinct possibility of the PA collapsing.

Israel had previously pursued a two-state solution to sever any connection between the Palestinian issue and Israel by withdrawing from the occupied territories, in other words, to eliminate occupation as a "domestic issue" and instead externalize it as the concern of a "neighboring country". The Trump proposal would, however, eliminate any real possibility for a two-state solution and require Israel to continue its occupier-occupied relationship with the Palestinians. Continuation of the occupation will likely create serious problems for Israeli democracy. 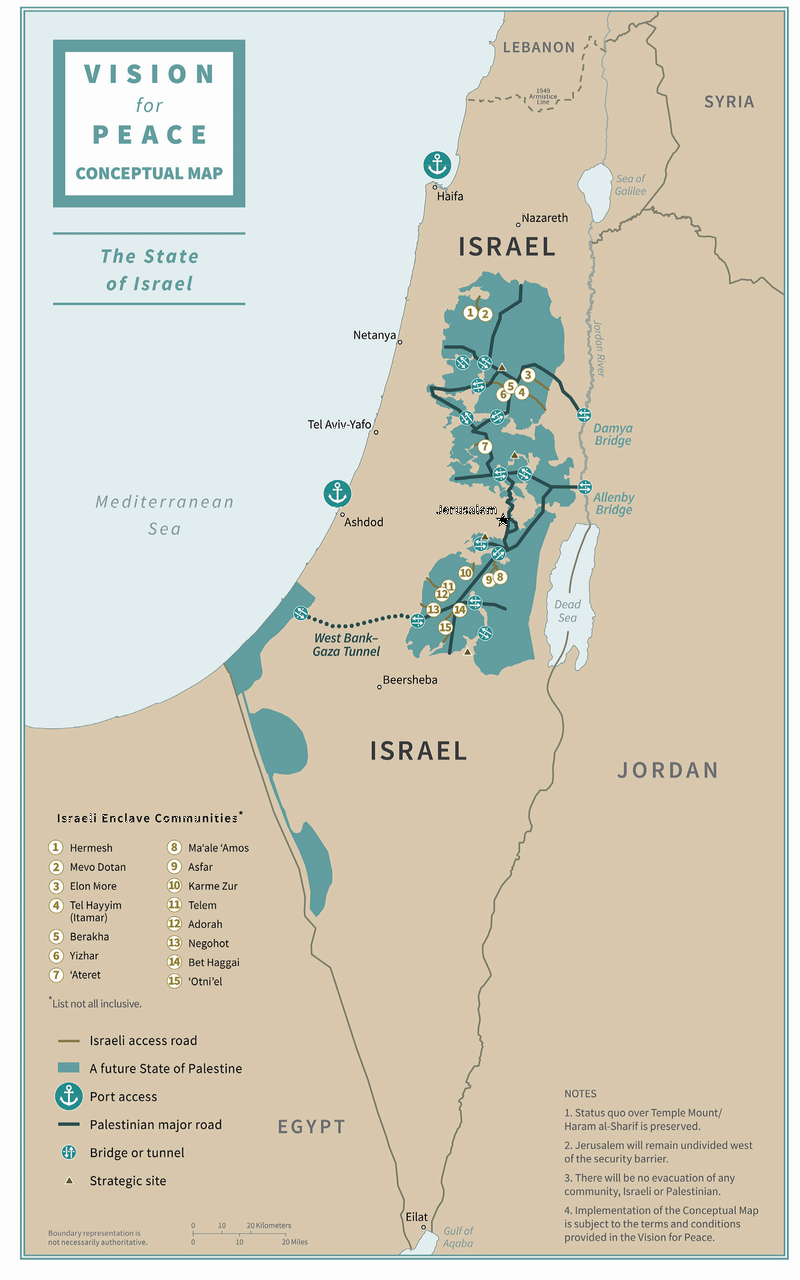